The Foundation for Human Rights mourns the passing Maniben Sita 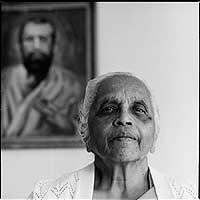 The Foundation for Human Rights mourns the passing Maniben Sita who died at the age of 94. An anti-apartheid activist, Manibena is known for her tireless commitment as the advocate of human rights. It is with sadness that the country losses a figure of this stature.

Maniben Sita was born in 1926 in Marabastad, Pretoria to Nana Sita and Pemiben. Her father, Nana Sita who was an executive member of the Transvaal Indian Congress was greatly influenced by Mahatma Gandhi after spending a few years in close contact with him.

Maniben took a keen interest in activism at the young age of thirteen.. She was greatly influenced by her Father and Mahatma Gandhi. After matriculating at Silverton College, Maniben enrolled at Unisa to study a BA degree simultaneously studying to become a teacher.

Maniben along with Mrs. Thayanagie Pillay, and a group of volunteers formed the Indian Women’s Congress in order to raise awareness and fundraise for the TIC. During this campaign, Maniben was detained twice, in 1946 and 1947. She continued her activism by accompanying her father and AB Nkomo during Mass meetings and recruitment initiatives. She was detained again in 1952 alongside two other activists from Lady Selbourne for occupying a bench that was marked for whites only. In December 1963, along with Zainub Asvat and 20 000 other women, they occupied the lawn of the Union Buildings overnight to protest the Group Area’s Relocation and the establishment of the Indian National Council. She was imprisoned throughout the sixties for her fight against the Group Areas’ Board.

Maniben was also integral to reviving the Transvaal Indian Congress, which joined the United Democratic Front to fight against the Tri-Cameral Parliamentary system. She was an active campaigner and successfully campaigned to boycott the elections.

In 1985,Maniben was one of those chosen to represent the Transvaal Indian Congress at the funeral of  Fort Calata, Matthew Goniwe, Sicelo Mhlauli, and Sparrow Mkhonto, known as  the Cradock four.  y. On the way back, the bus was stopped just outside Lenasia and all the passengers were detained and sent to Diepkloof Prison. Sita spent 87 days in solitary confinement under the draconian “detention without trial”provisions. Upon her release, she continued to protest against apartheid.

She served as an African National Congress (ANC) Councillor for five years. During her lifetime Maniben, received various awards for her activism including the Valliamma Mudliar Award to Exceptional Women, and the Ahmed Kathrada award for Excellence.

Outside of politics, Maniben was a pillar of strength within her community in Laudium, Pretoria. She was instantly recognisable in her trademark orange sari.  She led a simple, independent and uncomplicated life. She had a mutual respect for one and all. As an advocate of non-violence, this extended to her way of life and diet as well, being a strict vegetarian, she penned a cookbook named, “Give me Vegetables”. She was always willing to speak to, mentor and educate members of the community about Human Rights, Equality and Dignity.

Sita will be fondly remembered as a stalwart for freedom and justice in South Africa and the world at large.