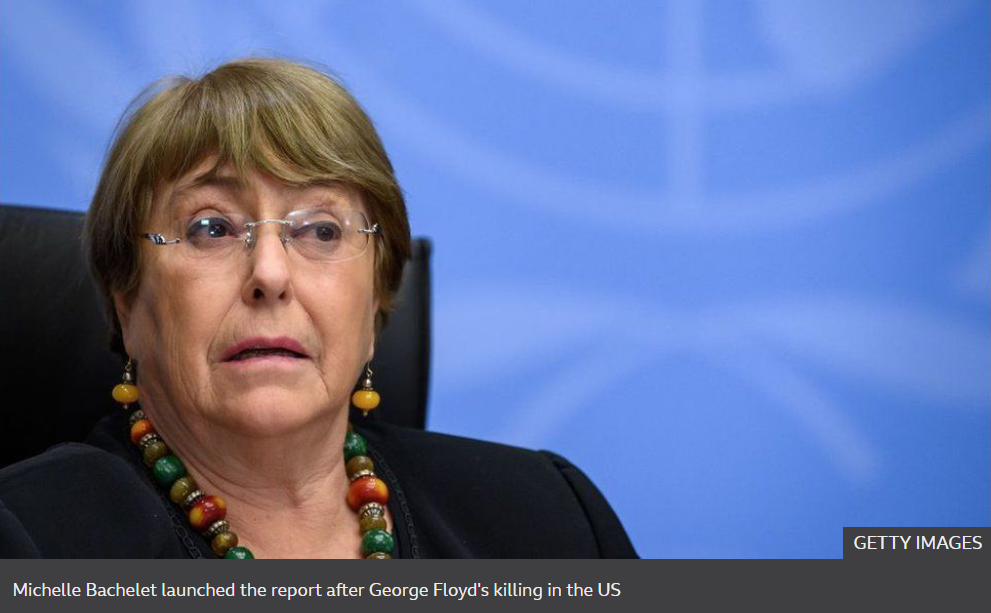 The United Nations Human Rights Council has urged global action including reparations to “make amends” for racism against people of African descent.

The findings cite concerns in about 60 countries including the UK, Belgium, France, Canada, Brazil and Colombia.

The study began after the murder of George Floyd, an unarmed black man, in US police custody in 2020.

The findings say protests over the Minnesota man’s death and the conviction of a white policeman were a “seminal point in the fight against racism”.

In a statement on Monday, UN high commissioner for human rights Michelle Bachelet called “on all states to stop denying – and start dismantling – racism” and to “listen to the voices of people of African descent”.

The UN’s report is based on discussions with more than 300 experts and people of African descent and seeks to push nations to take actions to end racial injustices.

It found that police use of racial profiling and excessive force was systemic in much of North America, Europe and Latin America.

The report said racism was the biggest problem in countries associated with the former trade of many millions of Africans for slavery.

The findings conclude that in order to achieve racial justice countries should “make amends for centuries of violence and discrimination… including through formal acknowledgment and apologies, truth-telling processes, and reparations in various forms”.

It praises Black Lives Matter and says the group should “receive funding, public recognition and support”.

Ms Bachelet, a former president of Chile, said reparations must not only be financial in nature, but include other “guarantees” to prevent future injustices.

She said: “States must show stronger political will to accelerate action for racial justice, redress and equality through specific, time-bound commitments to achieve results.

“This will involve reimagining policing, and reforming the criminal justice system, which have consistently produced discriminatory outcomes for people of African descent.”

Ms Bachelet welcomed a “promising initiative” by US President Joe Biden to address racial inequity, which involves attempting to level the playing field by treating racial groups differently based on perceived need.